Shortly after returning form Desert Storm, and before leaving the Marines, I became involved with a woman whom I'll call Ms. X. We adopted a baby boy at birth, in an adoption contested by the vindictive birth father. That's Daniel, whom I usually reference here as TNG, and he's almost 17 now. Ms. X and I went our separate ways after being together for six years; Daniel was about 3 at the time.

I left San Francisco for Portland, Oregon, in 2000, intending to continue visiting with Daniel regularly, but Ms. X was quite possessive of Daniel and made it difficult for me to see him. I moved back to SF in 2007, hoping to be able to see more of Daniel. I became involved with G, a woman I'd known from high school (she'd been my sister's best friend, and my secret crush) who was then pregnant from a previous relationship. The relationship with G quickly went sour but by then I was fully involved in parenting Sophie (aka "Bunny") - my first chance to finally be a full-time parent.

During my time raising Sophie, she and Daniel had only gotten to meet one another on a few occasions. But Daniel is a great kid and he's very good with younger children, and he and Sophie bonded immediately.

I've finally been able to set it up so that Daniel can come over and spend time with Sophie; I hire him to babysit her at the going rate. This works well - it gives them a chance to hang out, and lets Daniel earn some pocket money. And it makes me feel really good that they can finally have a relationship. Nothing in the world could make me happier. 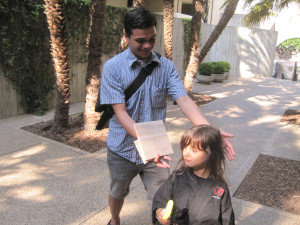 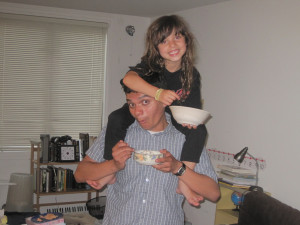