A couple of weeks ago I got a new Android phone, to replace my old Androd. So I turn it on and I want to start taking pictures with it, and the first thing it does is show me a screen with a lot of instructions on how to use the new gesture controls to do all kinds of cool things. OK, fine, this is great, but I wasn't in the mood for a surprise tutorial at the moment, I just wanted to take a picture.

But I got to wondering, How much time am I supposed to invest in learning this new business of swipe controls - especially when they'll probably be modified in six months, and maybe obsolete in two or three years?

Yeah, I'm old-school. I am 51 years old and the entire personal-computer revolution happened within my adult lifetime. I can adjust to new things, I can learn new skills - especially if it means doing something faster, easier, cheaper, or better. But so many of the tech world's innovations look to me like novelty for its own sake, and I get tired of learning things that I'm just going to have to un-learn. Old dog, new tricks, etc.

I know they're not marketing to me, they're marketing to people in their 20s and 30s, even teens, who don't mind learning new tricks. But sooner or later those young people are going to be my age.

I still know how to turn the phone off - at least that still works the same way as before. You press and hold the power button on the side, then select "power off" from the menu, and then confirm by touching the "OK" button on the left.

Except that now, they've moved the OK button to the right side. 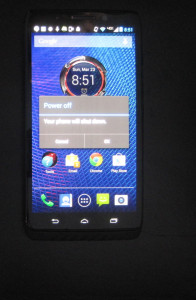 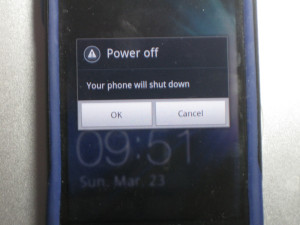