It's a Masonic initiation, only it's also like being called to the Torah because I'm called up to the altar to read from the Scriptures. One of the Brethren reminds me I'm supposed to take my hat off, and I look around for my kippah, which I'm allowed to wear. (This actually happens to me in Lodge.) Then there's a set of ritual objects, or 'working tools', displayed, only instead of the square and compasses etc., it's the Marine Corps emblem.

I've no idea what to make of all this, but there it is. So now you've had a peek at the weird stuff that rolls around in asher63's subconscious.

How to speak New Age.

So we went to Mbale and saw the schools and ran into none other than Rabbi Gershom himself on the road. That was fun if exhausting. Then came the Sipi Falls fiasco.

After Mbale, somebody - fortunately, I forget who - had the bright idea to go to Sipi Falls. Now of course I had never heard of Sipi Falls but apparently it's some locally famous tourist destination. It quickly became apparent that nobody (Shadrach, Yonatan, Shadrach's wife, the driver, or the other 2 people who were ride-sharing with us) had ever been there or knew how to get there. The driver - a big, quiet man named Grace - stopped several times to ask for directions, and finally a skinny, muscular guy in a red T-shirt drove up on a motorcycle and offered to save the day. He knew all about Sipi Falls and could offer us a variety of tour packages at reasonable rates.

We paid some money up front (rather, I did) and were led up a trail. We got a glimpse of a big, lovely waterfall, which I dutifully photographed, and continued up the trail after the red T-shirt guy. The guide then stopped at a kiosk manned by his partner and told us that before we went any further he would need more money. This was where we all kind of started looking at each other and going "ummm". The guide's promises and terms kept changing and got more and more confusing, and Shadrach and the driver started arguing with him. We turned around to leave, and he demanded another 21,000 shillings to take us to the next stage of the tour. I pulled out 21,000 shillings and said "let's just pay the guy and get out of here." We started driving back down the trail, and after a short distance found our way blocked by a gate crossed with a bamboo pole, courtesy of red T-shirt guy's accomplice. This was the final straw for the normally mild-mannered Grace, who jumped out, yelled something at the tour scammer, and shoved the bamboo barrier aside. We roared through the gate defiantly like the Dukes of Hazzard. Fortunately, despite the Sipi Falls misadventure, my visit to Mbale was amazing and breathtaking. 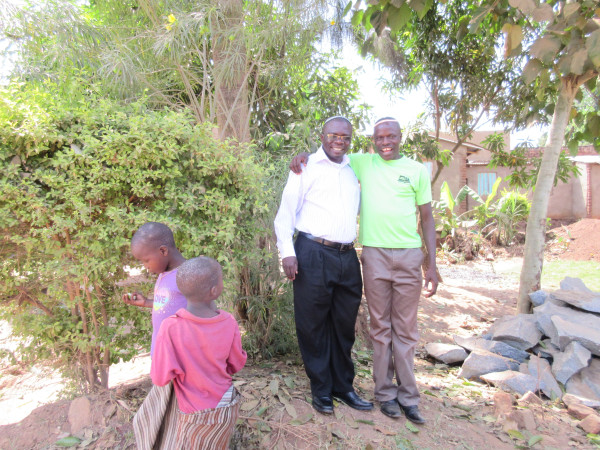 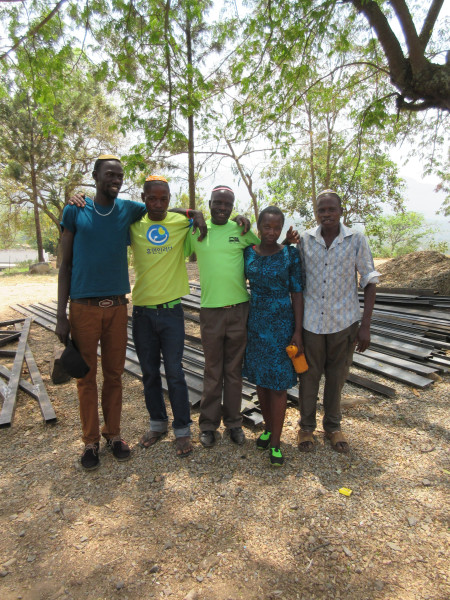 Yonatan is on the left in this one; Shadrach is in the middle, and his wife is next to him in the blue dress. Yoash is on the right.
Collapse