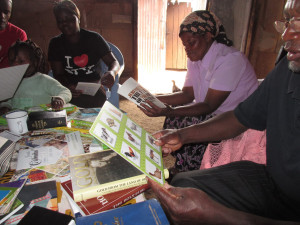 A year ago, I spent two weeks in Kenya and Uganda visiting the African Jewish communities in those countries. This picture is the family of Yehudah Kimani (his parents Ruth and Yosef are on the right) looking at some Jewish books and educational materials I brought from the US. I like this picture because you can see Yosef holding a set of picture cards with the Hebrew names of various farmyard and wildlife animals - cow, chicken, horse, sheep, elephant - most of which are unlikely to be part of the daily experience of the largely urban American Jewish population.

Here, as you can see (look at the doorway) the situation is somewhat different.

I stay in touch with Yehudah and many others in the African Jewish community (in Kenya and Uganda, as well as in Nigeria and elsewhere in West Africa) via Facebook. (Yes, it does have its uses.) Just tonight I learned that a young man from Ghana has joined our tribe.

You can read about my trip under the East Africa 2016 tag.

Drinking in bars can get spendy, so I try to limit my visits to the bar downstairs (three shots of JW Black ran me 28.50 - this is why I buy my own whiskey) but I decided to splurge tonight, and I needed to get out of the apartment anyway.

Marco, the manager (of the bar and of the adjoining Italian restaurant) was there as usual. The bar hostess was a slim, attractive young woman whose name I didn't catch. The crowd was already thinning out (it was around 10pm, and the bar closes at 11 on weekends) so it was pretty quiet.

I gathered that an apparently drug-addled man had been banging on the windows of the bar and of the Admiral lobby shortly before I arrived. Portland's Finest had been summoned and were having a chat with the fellow on the corner. (I would later see a pair of police cruisers parked on the corner of 16th and Morrison after I left the bar.)

I'd overheard the bar gal say she was moonlighting while pursuing a Master's in geography. That got me curious and I asked her about it: What did a Master's degree in geography mean to her? Did she study primarily geological data, or political/economic, or both? She said it depended on what type of data you were trying to map - for example, if you wanted to make a map of the best places to buy a home in Portland, you'd take into consideration things like median home price, soil types, and so on. I was immediately reminded of Mission Possible SF which I knew from my days of living in the Mission District.

I paid my bar tab and headed upstairs. I'm on a budget these days, now that the ghost of Uncle Fred is no longer paying my bills, but I didn't mind paying a few dollars for a couple of drinks, a change of scene, and some interesting conversation.

This is so Portland.
Collapse