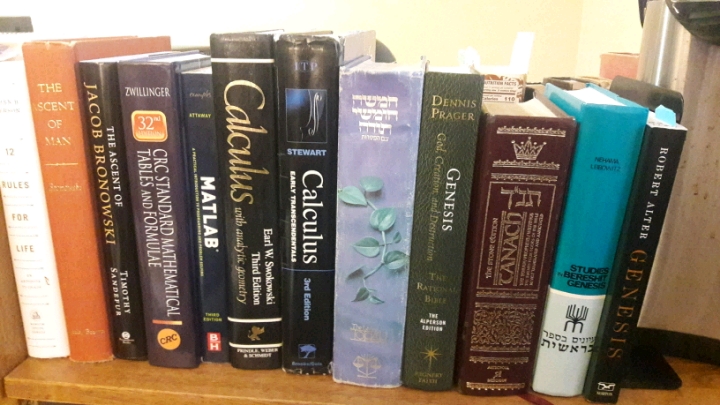 Science was my first religion. I always wanted to understand how the world works. My parents were open-minded people, but we were a troubled family; I had a difficult time in school and performed poorly in the classroom.

In my teens and young adult years, I became increasingly interested in Judaism and began studying Hebrew. I respected the Jews - the nerdiest people on Earth! - for maintaining their tradition and values in the face of oppression, and even in modern times rebuilding a nation and an army. Learning to follow and practice the Torah way of live - albeit VERY imperfectly! - helped me stay sane and has kept me balanced and grounded over the years.

These days I'm more grounded and more disciplined than when I was younger, and I don't have the distraction of a lot of dysfunction and drama in my personal life. So I'm looking forward to investing some effort in learning science and mathematics.

Via my friend Yehudah Kimani in Kenya.

(Yehudah is not related to Wendy Kimani.)

There is stone in me that knows stone,
Substance of rock that remembers the unending unending
Simplicity of rest
While scorching suns and ice ages
Pass over rock-face swiftly as days.
In the longest time of all come the rock’s changes,
Slowest of all rhythms, the pulsations
That raise from the planet’s core the mountain ranges
And weather them down to sand on the sea floor.

Endures in me record of rock’s duration.
My ephemeral substance was still in the veins
of the earth from the beginning,
Patient for its release, not questioning
When, when will come the flowering, the flowing,
The pulsing, the awakening, the taking wing,
The long longed-for night of the bridegroom’s coming.

There is stone in me that knows stone,
Whose sole state is stasis
While the slow cycle of he stars whirls a world of rock
Through light-years where in nightmare I fall crying
“Must I travel fathomless distance for ever and ever?”
All that is in me of the rock, replies
“For ever, if it must be: be, and be still;
endure.

Kathleen Raine was a friend of Jacob Bronowski, a fellow member of an avant-garde crative circle at Cambridge during Bronowski's studies there in the late 1920s. Raine

recalled having tea with [Bronowski] and [James] Reeves, feeling overwhelmed by his hyperintellectual speaking style and his habit of referring to himself 'with the editorial "we".'
(Sandefur, p,29.)

Like Bronowski, Raine would go on to become an expositor of William Blake, although it is not clear whether Raine was directly responsible for Bronowski's interest in Blake (p. 88).

This poem was included in a volume of science-themed poetry our family had when I was a kid, titled Imagination's Other Place. I still own the book, and this is still one of my favorite poems.
Collapse